System of Rice Intensification SRI, for rural development of Madagascar by malagasy farmers... 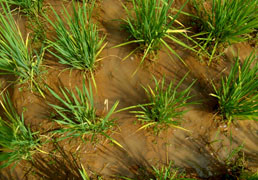 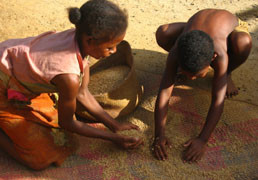 OPERATION SRI MADAGASCAR seeks to provide support to the Malagasy community organization TEFY SAINA and to promote the spread of the System of Rice Intensification and agrobiology through press and informational materials as well as projects and partnerships.

In 2008, rice production in Madagascar totalled some 3,000,000 metric tons, with an average yield of 2 metric tons per hectare, falling short of domestic consumption: every year, the country must import upwards of 200,000 metric tons of rice to meet demand. Madagascar routinely suffers from food shortages, a situation only exacerbated by the current spike in grain prices, while more than 80% of the population lives on less than one euro a day.

In the 1980s, Father Henri de Laulanié, a French agronomist working with peasant farmers in Madagascar, developed a method of rice cultivation that revolutionized traditional practices, now known as the SYSTEM OF RICE INTENSIFICATION (SRI). SRI is structured around several simple techniques: early replanting of rice seedlings, replanting on a grid, partial drying of rice paddies. SRI is also entirely ORGANIC, which frees small farmers from the cycle of debt incurred by buying increasingly expensive chemical fertilizers and pesticides.

SRI is now used by farmers in over thirty countries, where it has been shown that these techniques can easily double or even triple yields even in the first year of harvest using SRI.

Though there are 1,721,000 rice growers in Madagascar, only 65,000 of them (about 3.5%) currently use SRI, due to a lack of diffusion of and training in these techniques throughout the country. Over time, promoting SRI would ensure that Madagascar becomes self-sufficient in rice production, and could even begin to export.

Widespread adoption of the System of Rice Intensification, or SRI, would amount to a development program for Madagascar driven by Malagasy farmers.

Since 1990, TEFY SAINA (ATS) has worked to train local rice growers in SRI. But like many so Malagasy organizations, ATS suffers from a lack of funding.

OPERATION SRI MADAGASCAR began between May 25th and June 1st, 2008 in Mayotte and June 2nd to June 15th in Reunion Island. Through this initiative, we sought to raise awareness for the efforts of TEFY SAINA ("training minds" in Malagasy) and to lend support to the diffusion of SRI and other agrobiology techniques in Madagascar.

In light of the connections and rich exchanges that took place during this initiative, OPERATION SRI MADAGASCAR and TEFY SAINA would like to further cooperation between Mayotte, Reunion, and Madagascar on a long-term basis. TEFY SAINA has offered to meet the burgeoning demand for training in agrobiology in Mayotte and Reunion by offering courses at several of their training centers in the following fields:

At present, the centers presented below can all host students, farmers, or other interested parties for training sessions. The regional cooperation and fundraising undertaken by OPERATION SRI MADAGASCAR will only further the quality of the courses offered by affiliates of TEFY SAINA and their ability to host larger groups.

These trainings will bear the advantage of bringing together farmers from these three islands in a mutually beneficial context. Eventually, such exchanges will also help to bolster local agricultural training in Madagascar with the goal of bringing about food self-sufficiency for the Big Island, as Madagascar is often called.

For any information about SRI, or our NGO, please contact us:

More information below only in french: